At present, due to time constraints & predation, we do not have chickens or any egg producing birds. We have not made any plans to get more any time soon.
​Sorry & this is a bummer for me too. 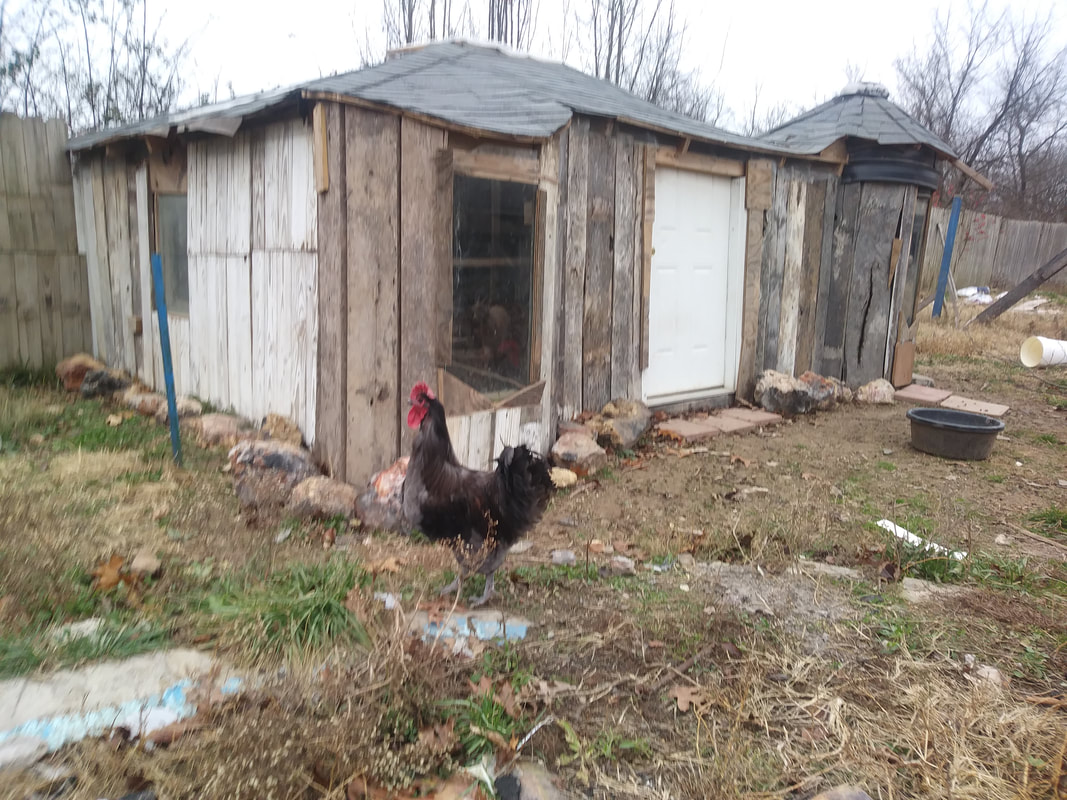 New chicken house.
First off I no longer keep Easter Eggers. I really didn't like them and my customers didn't like their blue eggs. I now keep Golden Comets, also known as Cinnamon Queens or Red Sex Links. They are a cross between a Rhode Island Red rooster and a Rhode Island White hen. They lay brown eggs and lots of them.
Everything has changed for the chickens. It started with me trying to find out what had the goats freaked out night after night. The only way to put the goats at ease was to sleep outside under the stars like the goats do. so I picked a nice couple of nights and slept outside. The goats tried to poop on me lots and one time I woke up to 3 baby goats standing over me looking down at my face! But nothing compared to when the critter showed up. All the goats went from relaxed to STAMPEEDING to me/over me and when the kill circle was formed and all was still, I heard it. As it got closer, I had my flashlight at the ready but then it detoured. It went to the mobile chicken house and tried to rip its way into it. Then it circled me and the goats on its way to the barn to try to dig into the new laying hens house again. I didn't want to scare it off with the light before it was in a spot that I could see it well, so I waited. Then I got a glimpse of it in the moon light so I shined my flashlight on it and sure enough it was a fox! Just standing there like a deer in the headlights. I got up and chased it out of the yard.
Fox really are not a danger to adult goats but they do put them on edge, fox being dogs makes them a goat's worst fear. But it does explain what dug into the chicken coop a few nights back and took some hens!
Long story short (too late I know) the chickens were just not safe in the mobile coop. So I did away with it. Don't get me wrong the coop had other downsides that I was trying to fix, but the fox was the last straw.
So I ended up building a very nice house for them that has wire over the vents and wire digstop in the ground as well as large rocks at the base of the walls. As an added plus, it also has eastern & southern facing windows as well as a south skylight to increase health and light. I also wired it for electric. This hut fixes all the problems I had with the last hut. So far I am very pleased and I am working on an outdoor run (it's winter now so the birds really don't need to be out in the cold rain. Frost bite on toes is a problem here.) I hope to have the run ready by the time the weather gets nice again. I also built in a door that allows me to free range the hens if I want to. 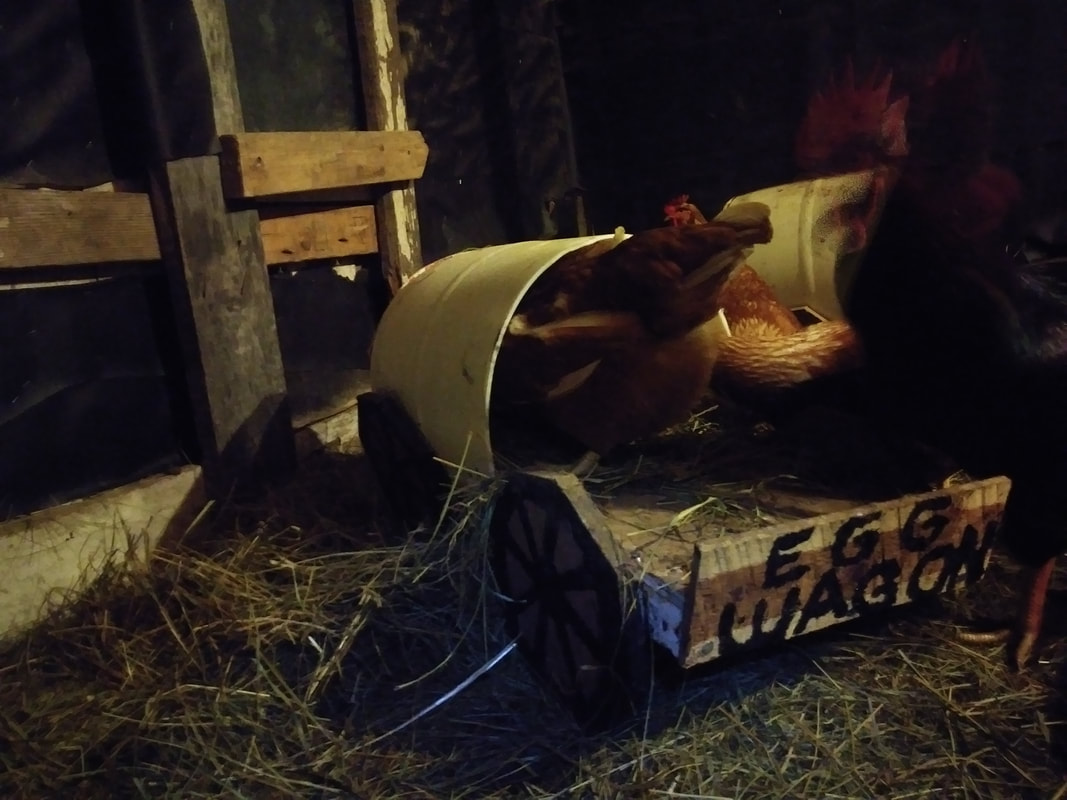 I had fun building this nest box! 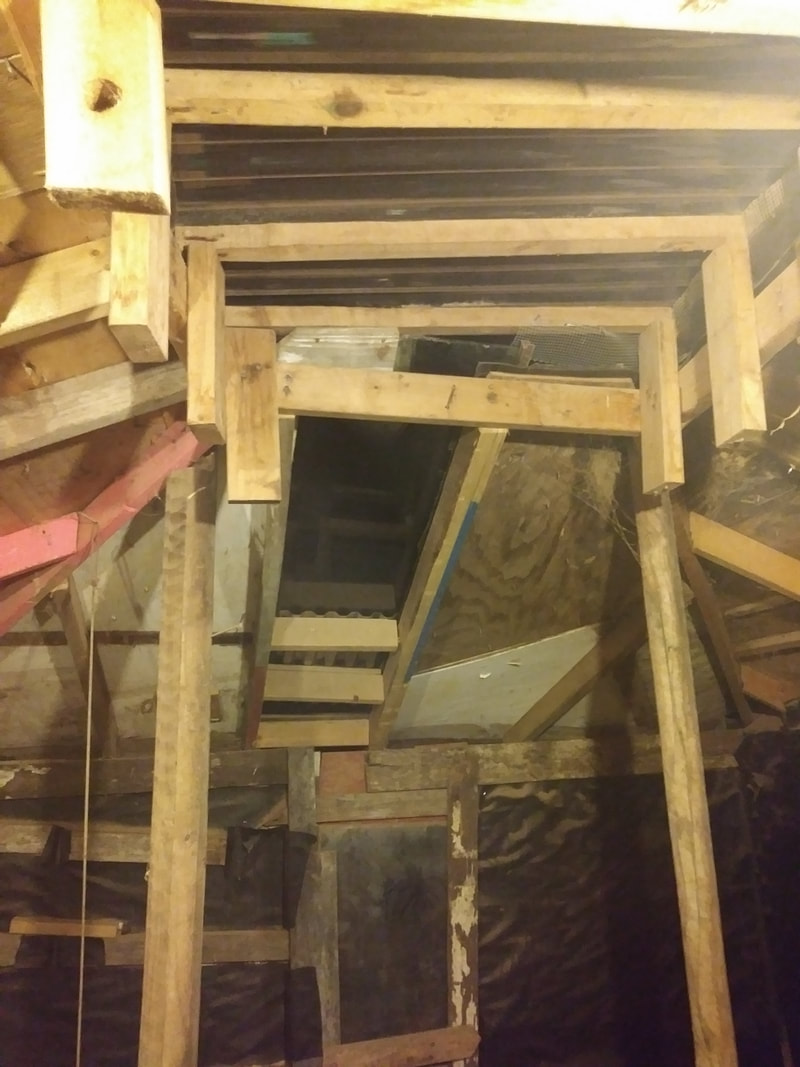 Sky lights and southern window. The black stuff on the walls is tar paper. It makes a great windproof insulation. 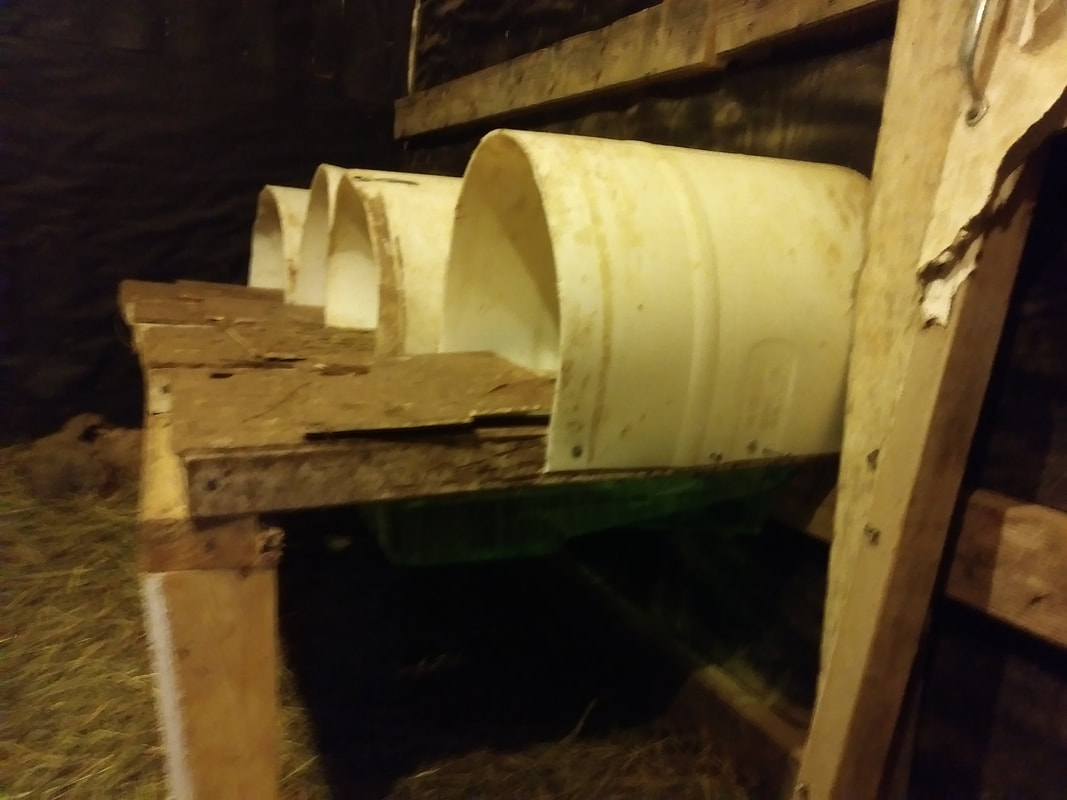 The other nest boxes. The chickens use these way more. I think it's because they are taller. 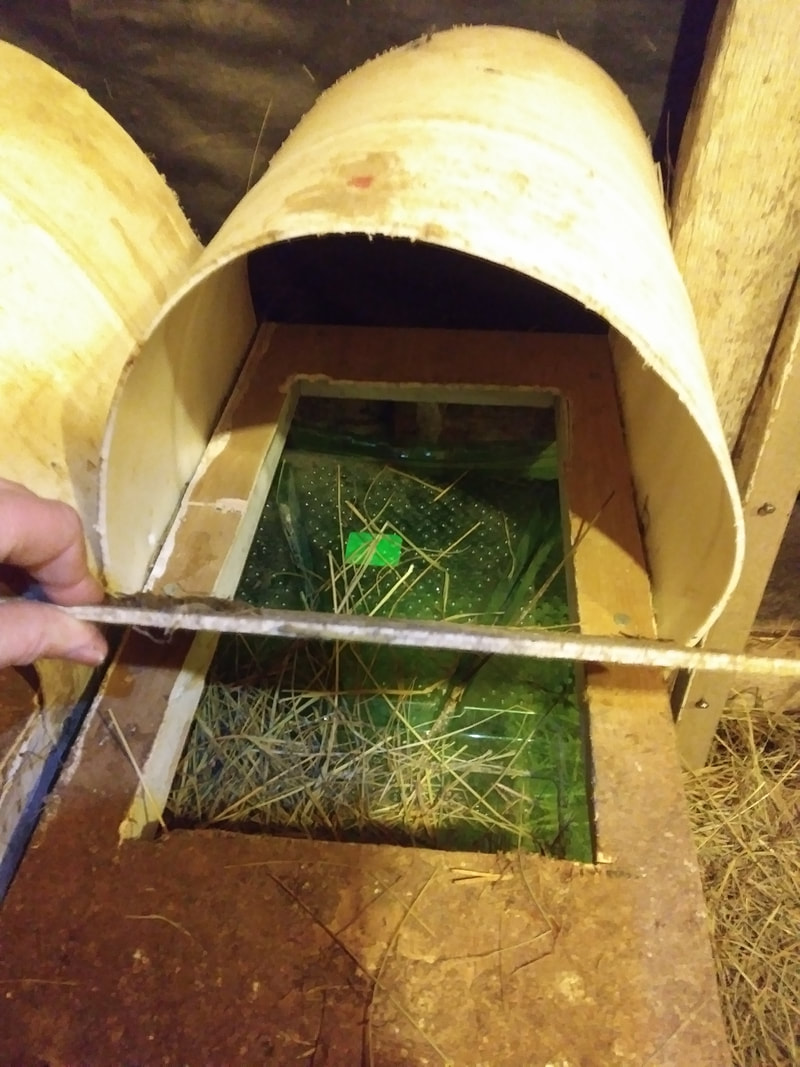 I used paint roller pans to turn the nest boxes into roll away boxes. It works good. 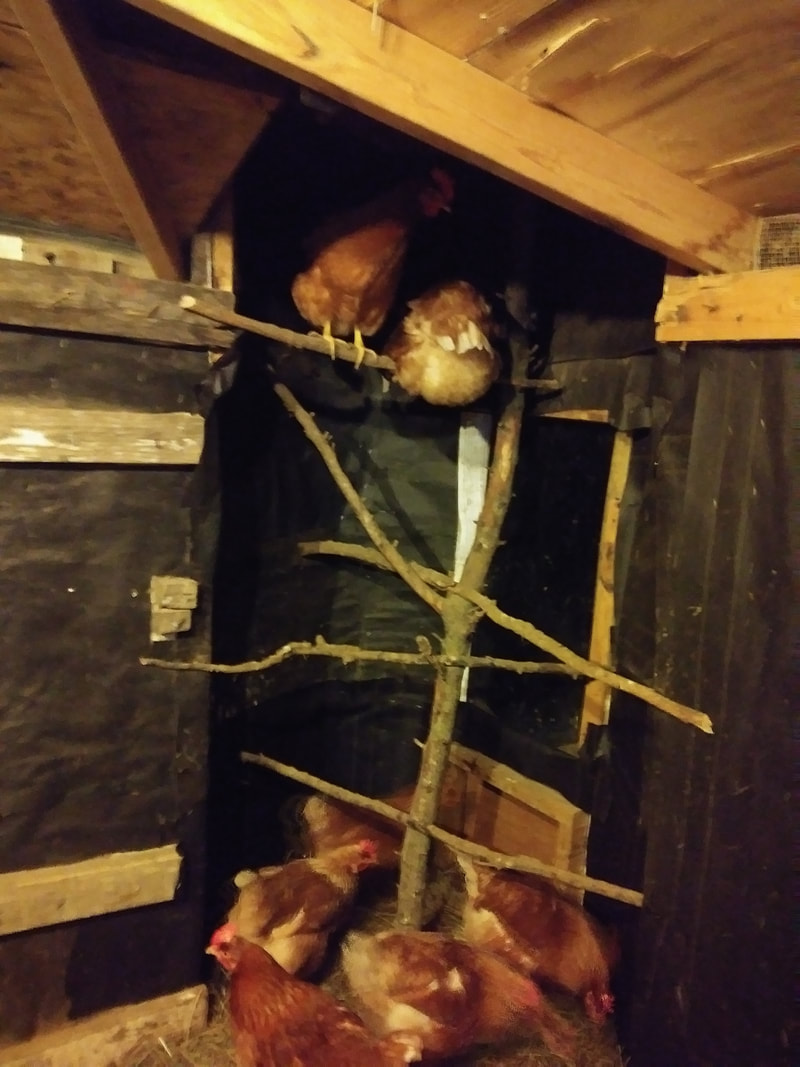 I wanted the roost to look like a tree but it didn't turn out that way. At least the birds like it! And they get to see the sunrise with their east windows (there is another roost like this one in the other corner tower) 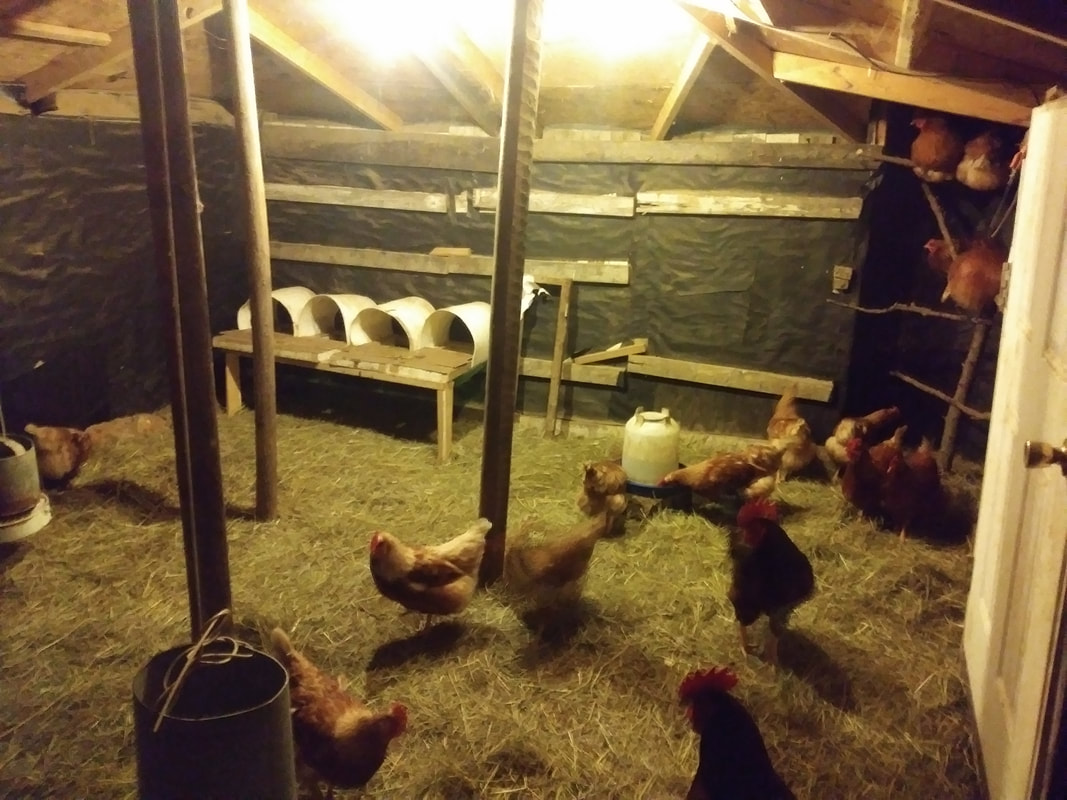 View from south to north. 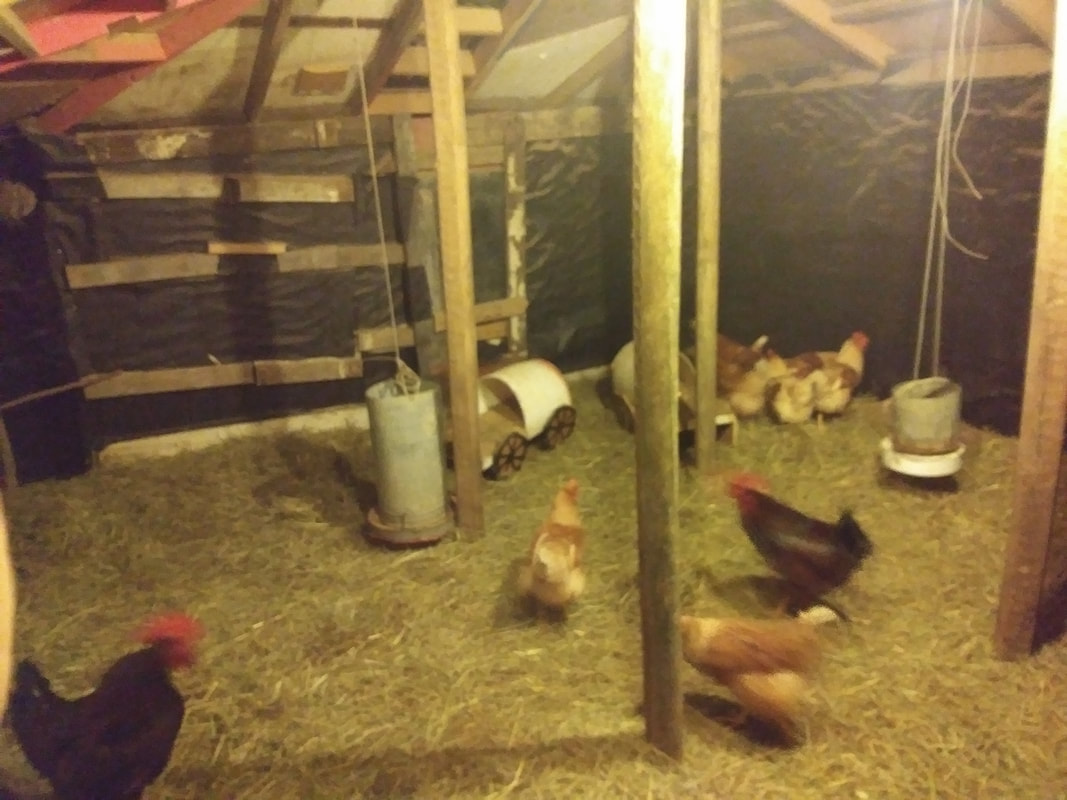 View from north to south.
Yes it was dark out when I took the photos.

As it turns out Easter Egger chickens take their name very seriously. Every day is an easter egg hunt when they are free range! So they now live full time in a mobile chicken house so that I can provide you with fresh farm fresh eggs instead of old but I just found em' farm fresh eggs. 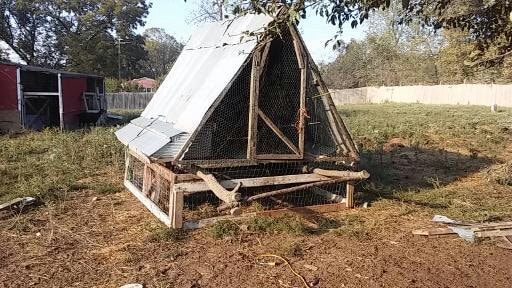 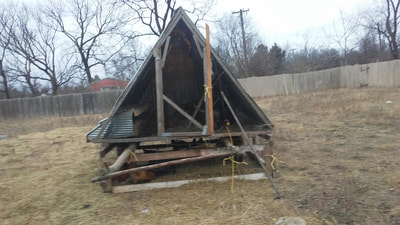 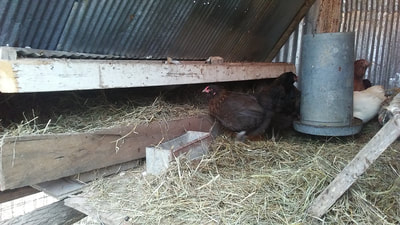 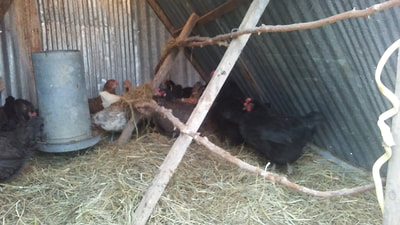 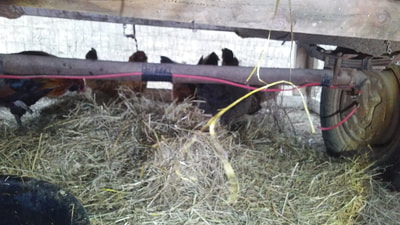 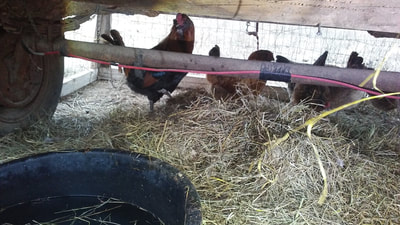 The chickens don't come out to graze with the goats. If you have ever had chickens, I'm sure you can think of a few good reasons why! Despite their containment in the 1 acre wood fenced yard, they are quite happy about the level of bug eating and blue bird chasing they get to do! Yes, they have it in for little wild birds.... I don't know why.
But I think they are most happy when they are digging around in the bedding in the goat barn. 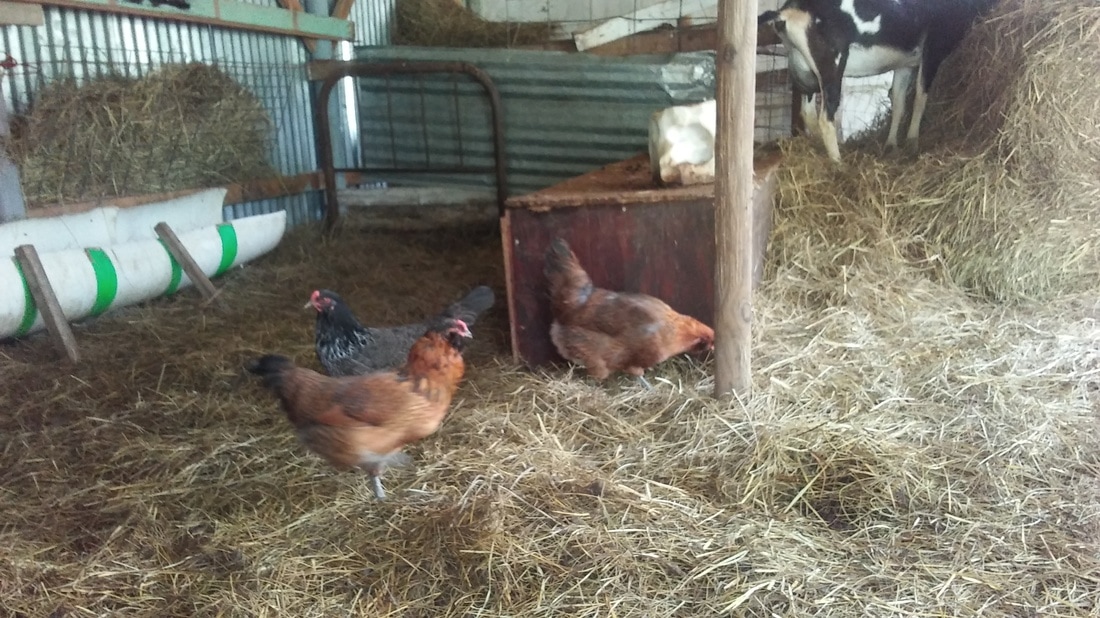 Other times they are laying around under a tree being lazy. 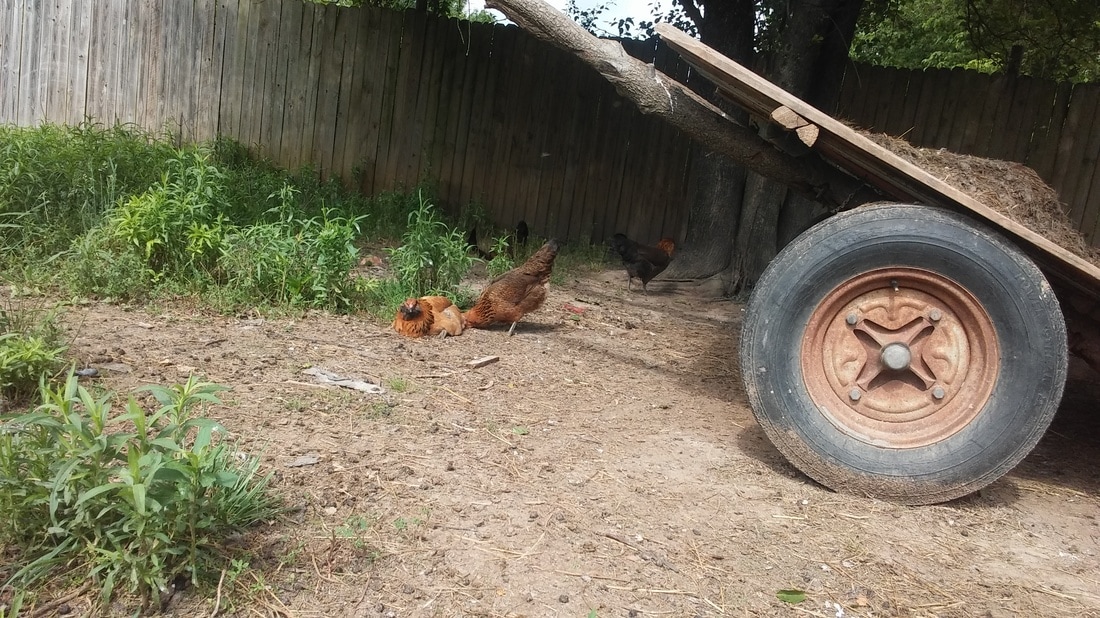 Or are trying to not get stepped on by the goats who think that all trees are for rubbing on. 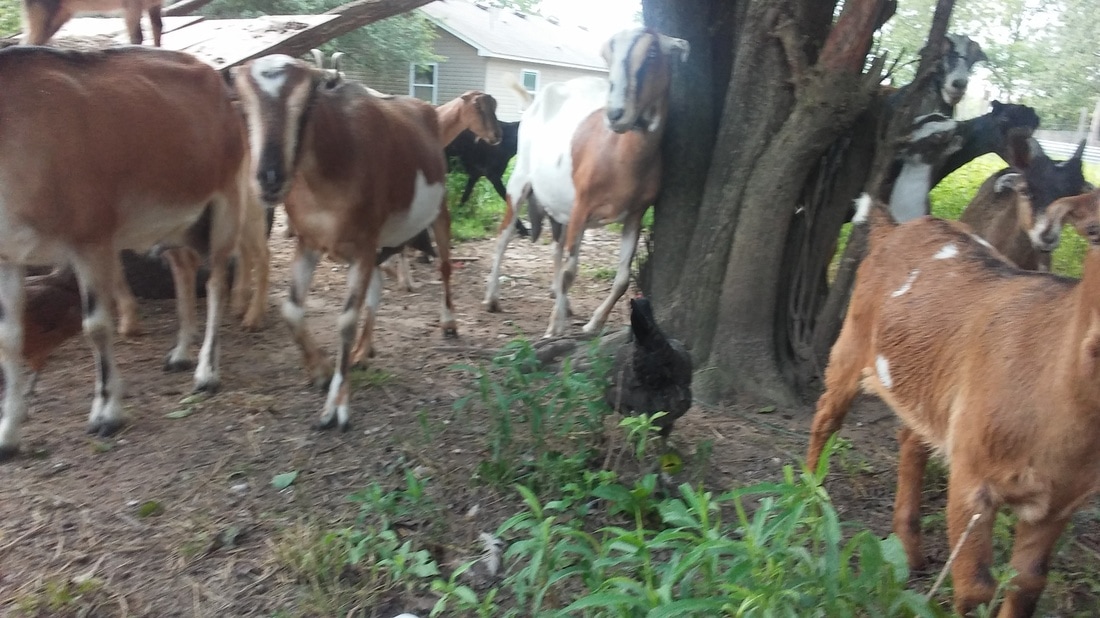 Chickens get mad if you don't feed them and they stop laying eggs just to get back at you for the offence to them. We feed layer pellets. Yes, it does have some corn in it, and no it's not labeled as non-gmo.
We do not feed medicated feed to our laying hens. However, when we get a new batch of day old chicks, we do feed medicated chick starter for 2 weeks as recommended by the hatchery. Then we switch to non-medicated chick grower, then non-medicated layer pellets. 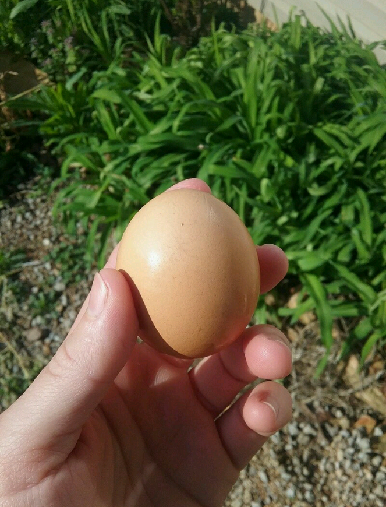 That's it! Bring on the eggs!

We gather the eggs every day after milking, this is the same time we feed.
After gathering the eggs, we clean them by first putting the egg under running hot water to close the pores, then I dip a fine stainless steel scrub pad in a 50% vinegar 50% water mix and softly rub off any dirt, doo doo, and any other bacteria harboring stuff such as: egg goop from if another egg is busted in the nest. I am aware of the protective coating that helps prevent the egg shell from being penetrated by bacteria and do every thing we can (within our financial ability) to keep the eggs clean in the nests but on rainy days the hens track it all in on their feet and you end up with eggs like this: 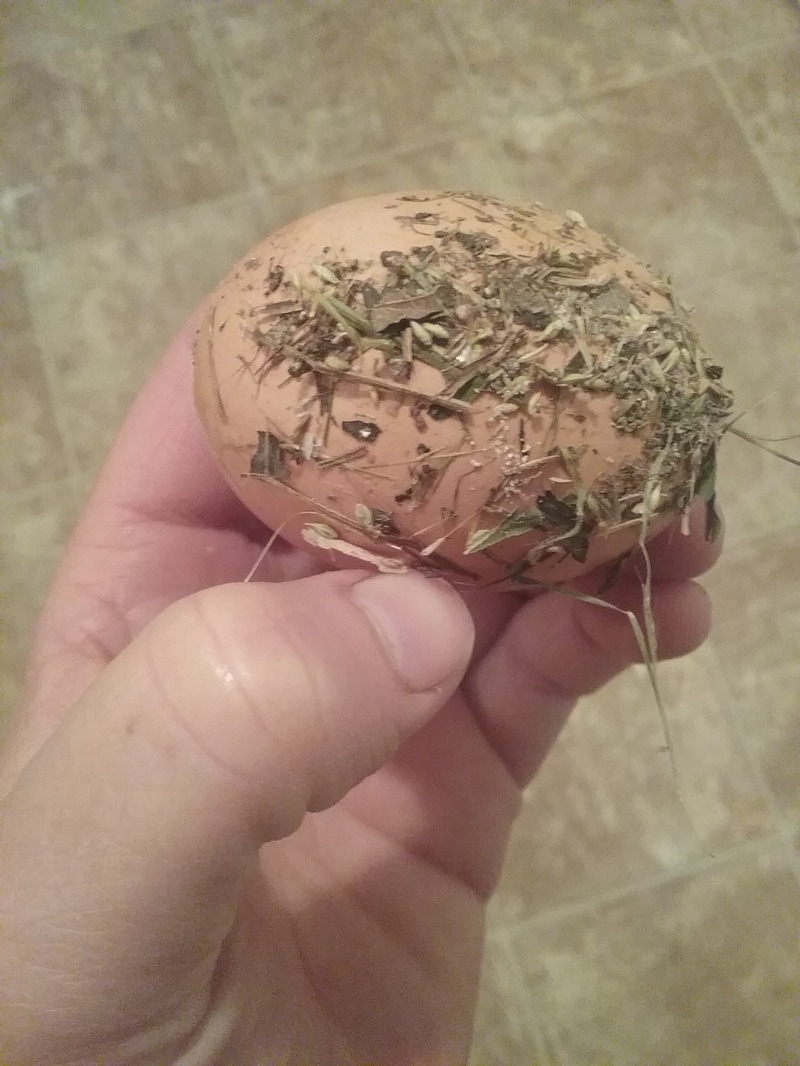 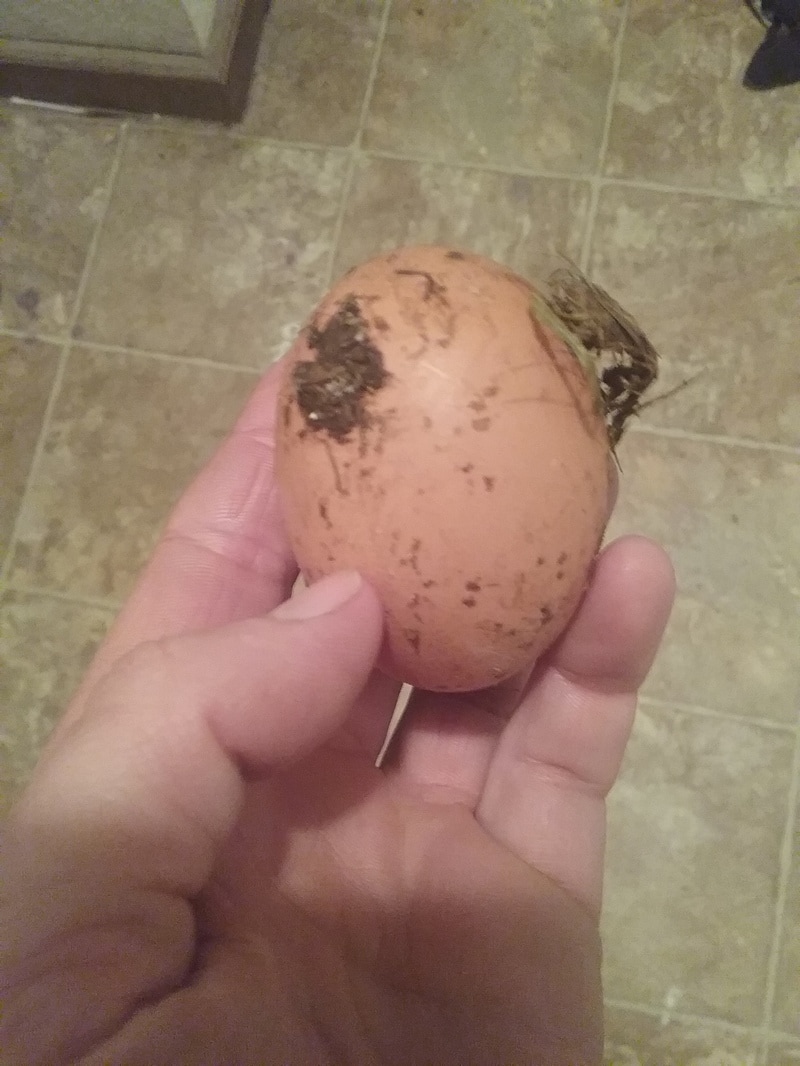 This is a big part of, if not the only problem, that brought about the anti-free range hen houses used in large scale farming today.
It's a simple fix really... if the chickens never go out and the floor is kept clean (very difficult when free ranging) then the hens can't track in a mess to the eggs.. tah dah! Problem fixed!
​
Occasionally folks ask us not to wash the eggs, but as a licensed egg producer we are required by law to follow the Missouri regulations on egg handling. Yeah it's illegal to sell eggs covered in filth, who knew? But luckily, we do not live in one of those countries where it is illegal to both sell dirty eggs and to wash eggs, yay!
Candling is the next step. Once the eggs are good and clean, we look them over really good to make sure they are suitable for sale. For example: 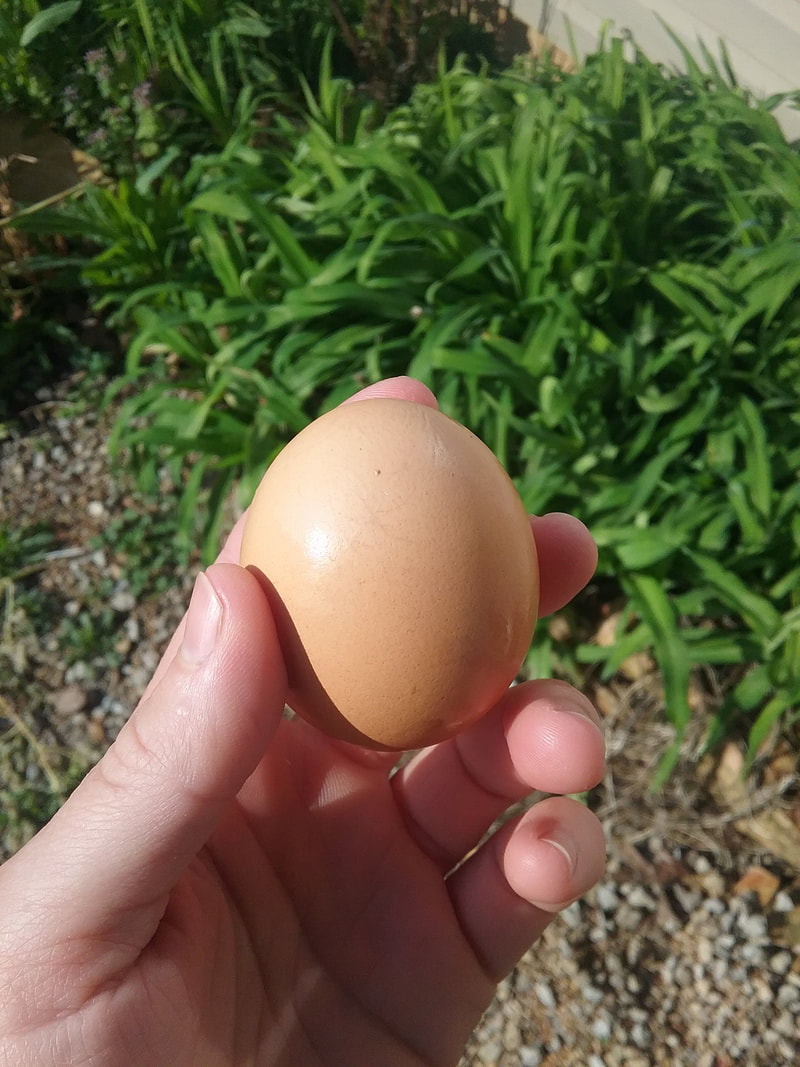 This is a normal egg that I had just collected and did not see its fault until I candled it. Both this photo and the photo below are the same egg, the same side of the egg on the same day.

This egg, although it looked good to go by the naked eye was found to be cracked when held to a light! This crack, even with the egg's protective coating intact, allows harmful bacteria to enter the egg. Eggs like this one are not sold.
Once we are done grading the eggs during candling, we label and place them in the self-serve refrigerator on the front porch. They are now available for sale.