About our GOAT MILK SOAP

The soaps are made using milk from my Lamancha herd. All the soap is vegetable based and hand made.
I make all of the soaps from scratch. No melt and pour here.
Goat milk soap for sale
Local Store Finder

I use the soap myself and my best friend Noelle also uses them. These soaps are also used extensively when washing the goat's udders before milking.

From the Soap Maker

I started making soap about 9 years ago (2010 ish) for my friend Noelle who has very sensitive skin and could not find any store bought soap in any store that would not make her break out. She even tried health food stores and those little soap bars at Cracker Barrel. They all made her breakout. 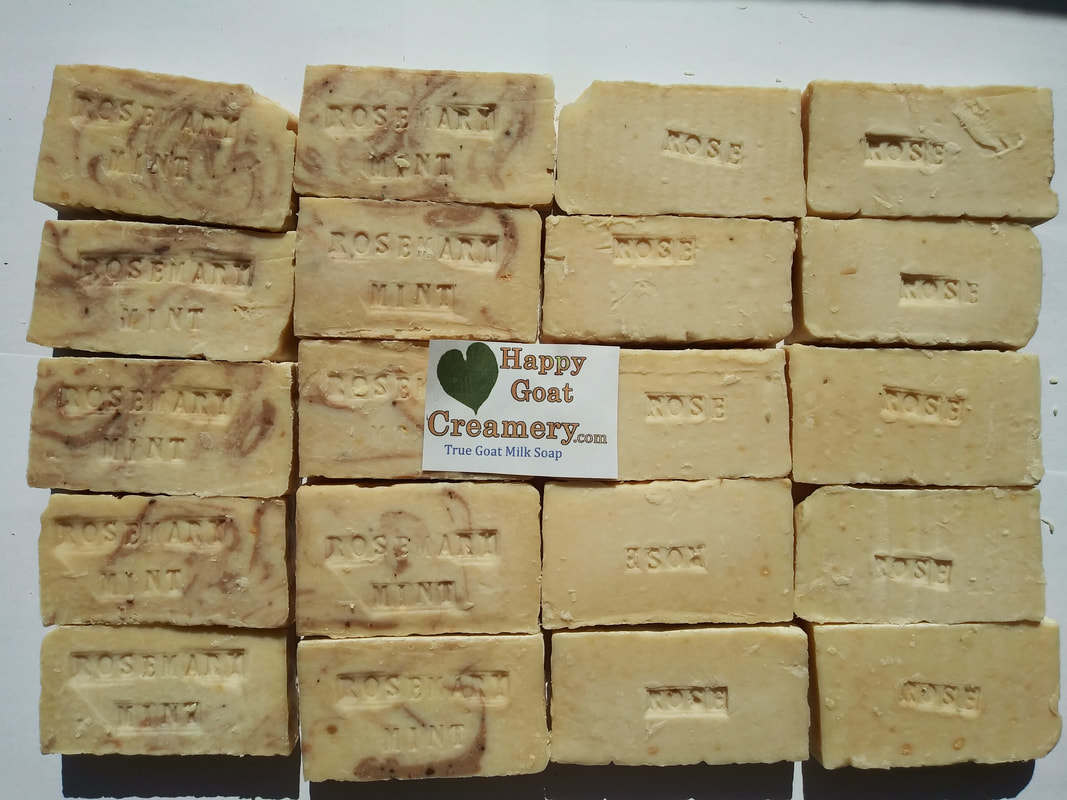 During her search, she met a young lady at work (a customer at the retail store my friend worked at) who said she had just the thing.... "my grandma makes Lye soap and it works for me, I'll bring you a bar." My friend was willing to try another bar but was hesitant to switch from Ivory because it was the best she found.
So she tried it, and it worked! No breaking out, and she told me that it was better than the Ivory. Only one problem..... the young lady did not leave any contact information for buying more soap..... once the bar was gone it was back to Ivory.
This is the part where she enlisted me to keep an eye out for Lye soap. Keep in mind at this point I had never made soap. So one day I was out riding my bike and saw a soap booth at the Farmer's Market and decided to ask, the response was..."NO!! I don't have Lye soap!!!! I wouldn't carry that. It is bad for your skin. Glycerin is the answer to everything."
So feeling thoroughly scolded I rode home and began pouring through the Internet trying to figure out what the heck all this crap is about..... I found out that Lye is simply a hardner (originally made by pouring water over ashes, over and over again) that when mixed with water or goat milk, it creates heat. Then once this milk and Lye mix is added to oils it begins to solidify the oils while you mix it. This is called trace.
This left me with "What the heck is glycerin?" so I dove deeper and found out that glycerin is a natural by product of making Lye soap. Each Lye soap bar naturally contains about 13% glycerin. The glycerin can be removed from the soap with some extra processing and be used for making glycerin soaps. (which by the way still have lye in them.) And yes, I have seen Fight Club and no, glycerin and nitro glycerin are very different! Apparently the process that glycerin must be put through to get the "nitro" added to it is not only extremely expensive but also quite complex. Sorry to burst your bubble but there really is no risk of explosion when making soap.
Once I found all that out, I began making soaps based off of what is said to be the easiest on sensitive skin and giving them to my friend to try. After about 4 attempts, I came up with an olive oil, coconut oil, and peppermint essential oil soap that she really liked and made that for her for a few years as needed.
However it had one flaw..... It was such a soft bar that it would turn to a clear slimey goo a few days after it got wet. Now I had a new mission..... Make a bar that does not turn to goo that also does not irritate my friend's skin. I found out that the problem was the quantity of olive oil combined with the coconut oil that has a low melting temp of only 75 degrees. over time I found that palm oil was great for firming up the bar and with a little added soybean oil the bar was perfect. taadaa! No gooey soap.
Now I have a vegetable based bar that works for my friend and remains firm like it should. This is the recipe that all of my vegetable base soaps are based off of.